The Ministry of Budhdasana, Religious and Cultural Affairs and the Department of Muslim Religious and Cultural Affairs had organized this year’s National Meelad Celebration, in coordination with the Management Committee of the Jamiah Naleemiah Institute, China Fort Mosques Society and China Fort Gem And Jewellery Traders’ Association on Sunday, 09th October 2022 at 10.30 hrs at the Al Jamiah Naleemiah Auditorium Beruwala.
The National Meelad program that had been arranged on this occasion was graced by Hon. Vidura Wickramanayaka, Minister of Buddasasana, Religious and Cultural Affairs and Hon. Hafiz Naseer Ahamed, Minister of Environment, Hon. Kathar Masthan State Minister for Rural Economy, Hon. Marjan Faleel Member of Parliament, Ambassadors of Indonesia and Palestine, Acting High Commissioner of the Maldives, and Senior Diplomats of Libya, Indonesia, Pakistan, Malaysia and Saudi Arabia, Religious dignitaries of Buddhist, Hindu and Islam, Government Officials , Principals of Schools, Members of the Business Community and general public.
This event was presided by Mr. Ibrahim Ansar, Director of the Department of Muslim Religious and Cultural Affairs. The Program commenced with the National Althem sung by Al Hummaisara National School Students and Qirath by M.H.M. Saham with the translation of M.F. Safer Rahman, Students, Jamiathul Al-Fassiya Arabic College China Fort Beruwala.
Religious dignitaries representing Buddhism and Hinduism offered the blessings and made speeches on the noble services of Prophet Muhammed (Peace be upon him). Ash Sheikh Agar Mohamed made a key note religious speech explaining the importance of Meelad celebration and with examples of life of Prophet Muhammed (Peace be upon him) his achievements in his lifetime.
Director, Mr. Ibrahim Ansar made the welcome remarks. Hon. Hafiz Naseer Ahamed made a Guest’s speech and highlighted the needs and desire of the Muslim community in Sri Lanka and reiterated the action to be taken for the betterment of the Muslim community in the future. Students of the Naleem Hajiar Ladies College performed a Cultural Programme identifying relevance of co-existence and harmony among all communities.
The Katheebs and Muazzins who have served more than 10 years in the Mosques in the Kalutara district were awarded certificates and cash reward in appreciation of their services.
The Amana Thakaful Life Insurance scheme that was introduced by the Department of Muslim Religious & Cultural Affairs and Amana Thakaful Insurance, were formally launched on this occasion.
The Department of Muslim Religious and Cultural Affairs also offered a cash donation to the family of late Mr. M. A. M. Nashard who was a member of staff of the Department of Muslim Religious and Cultural Affairs, killed in the bomb blast during the Meelad celebration in Godapitiya, Akuressa, in 2009.
The Vote of thanks was delivered by Al-Haj Aroos Anas Joint Secretary of China Fort Mosque Society. Special Dua prayers were conducted by Kaleefathul Shazuli Moulavi Zainulabdeen on this occasion.
Over 700 people participated at this grand celebration. All guests were provided with lunch and refreshments. 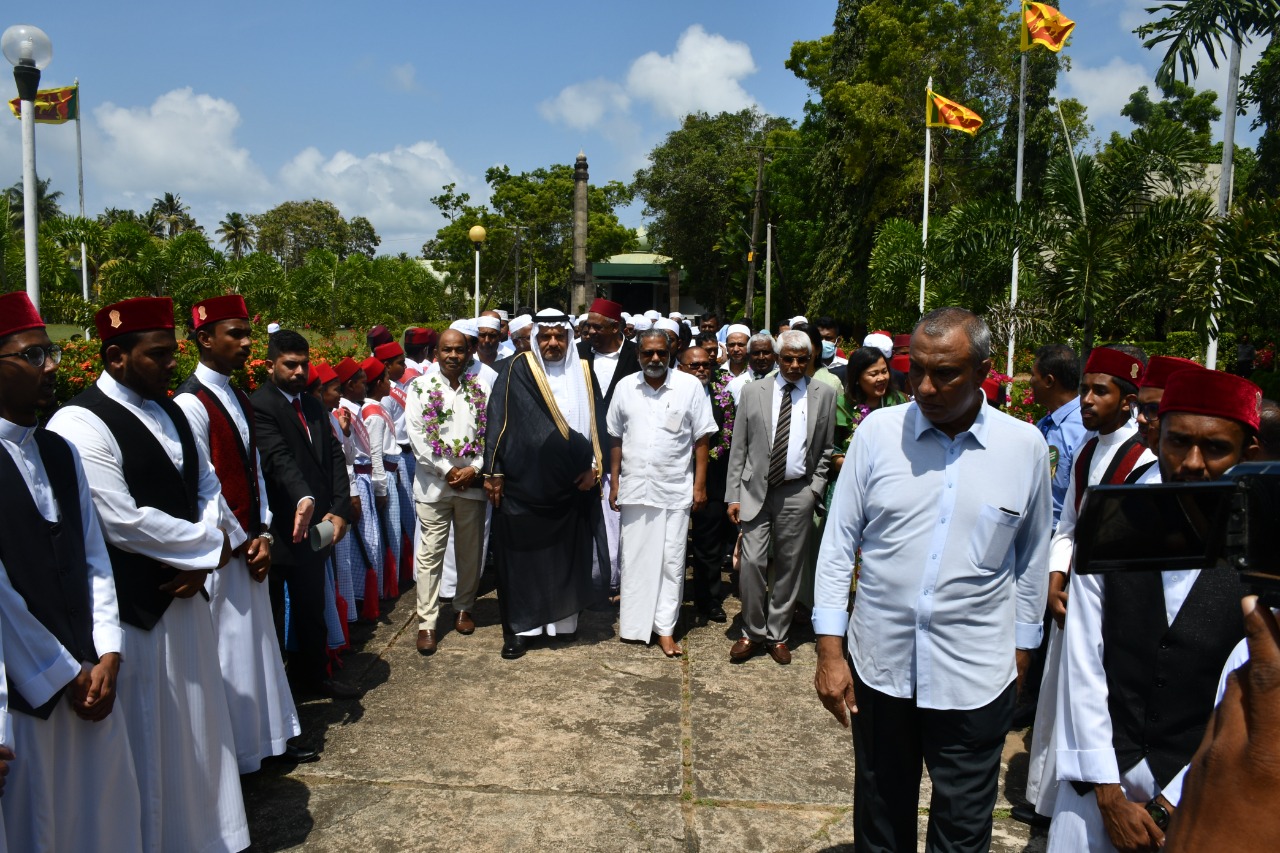 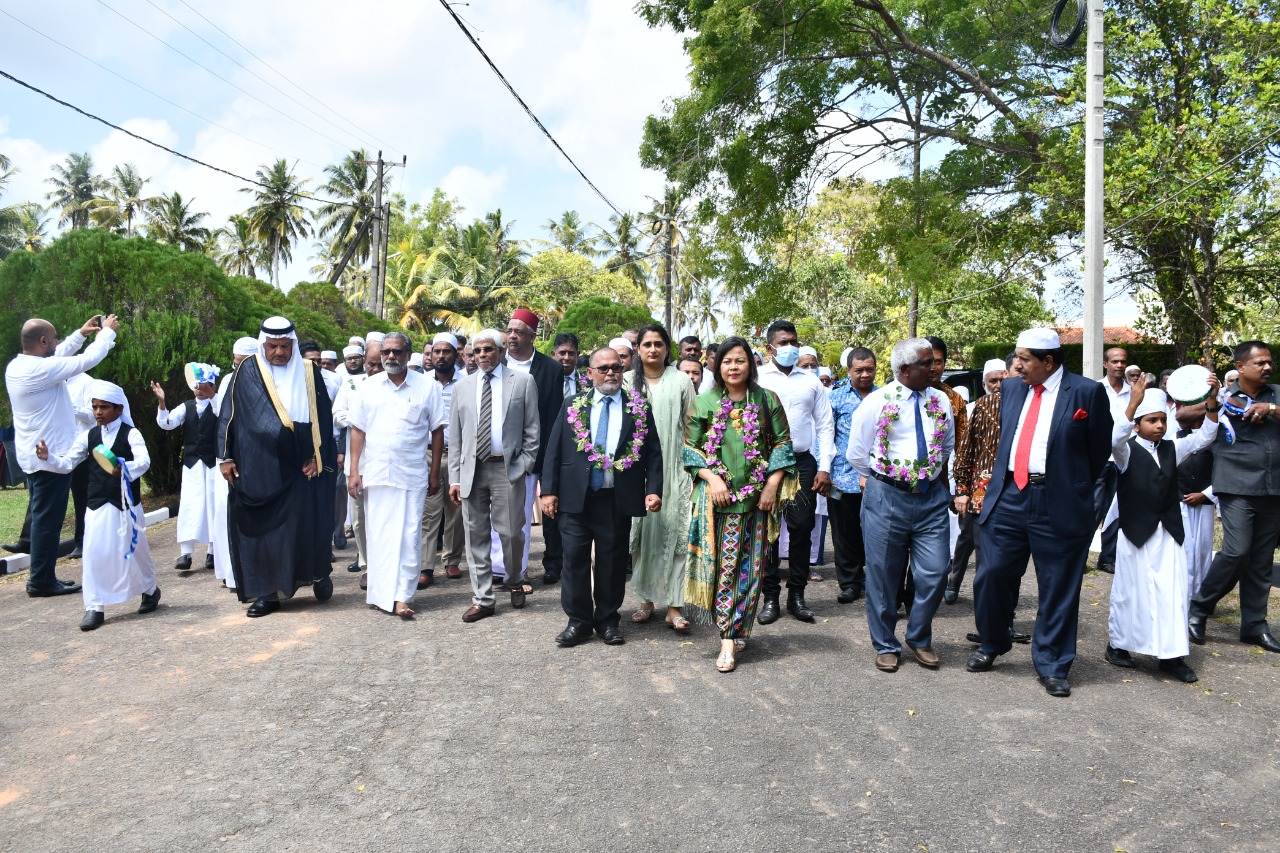 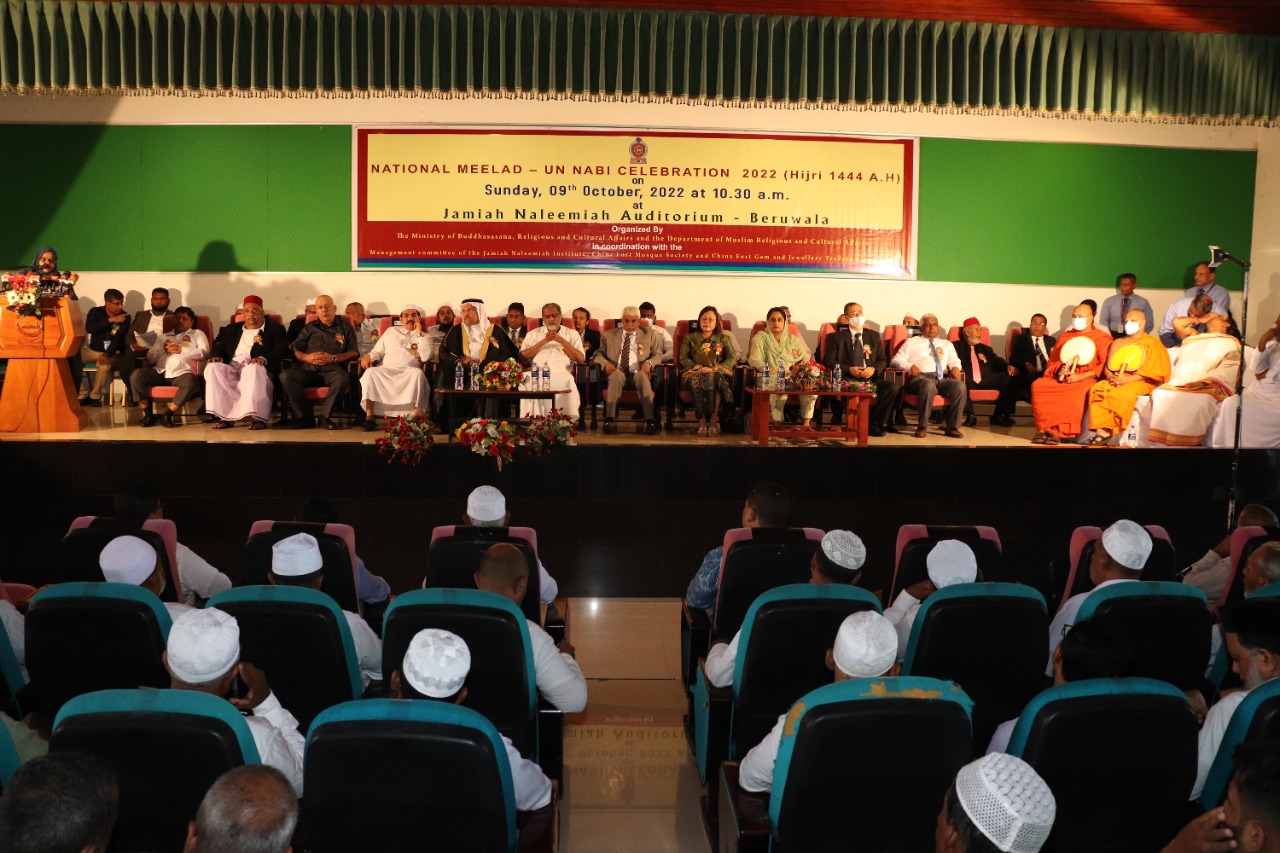 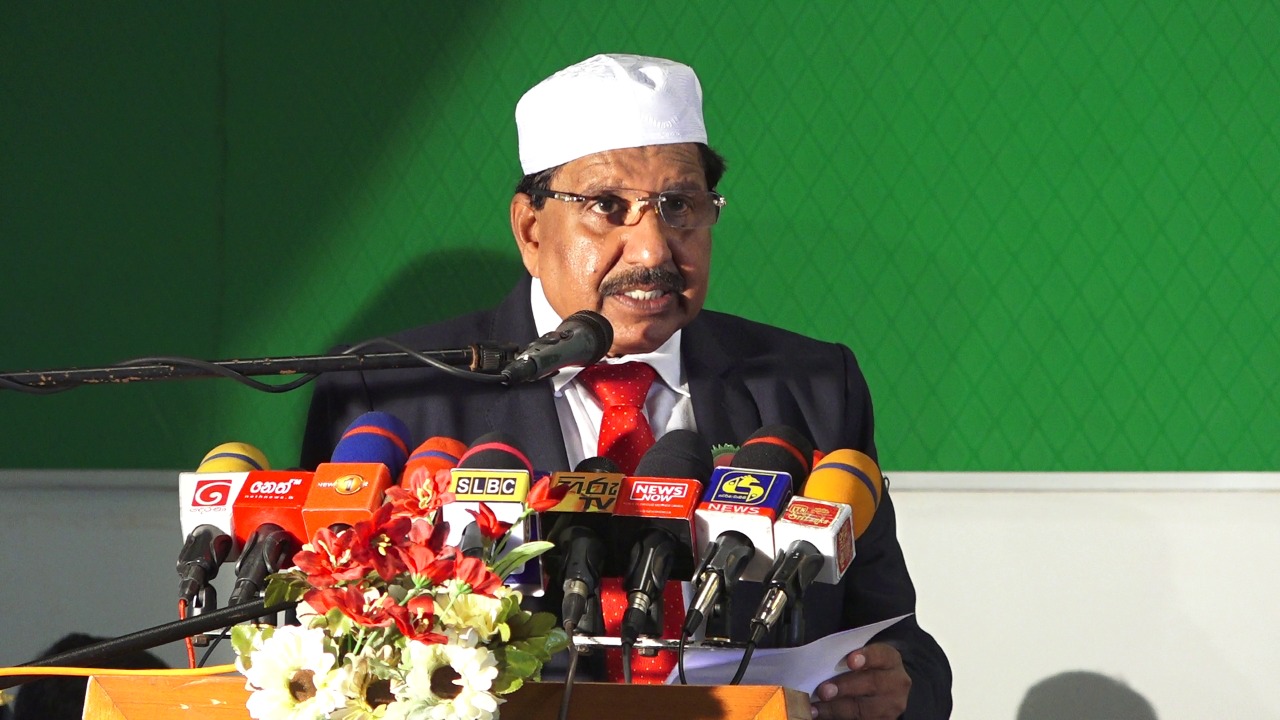 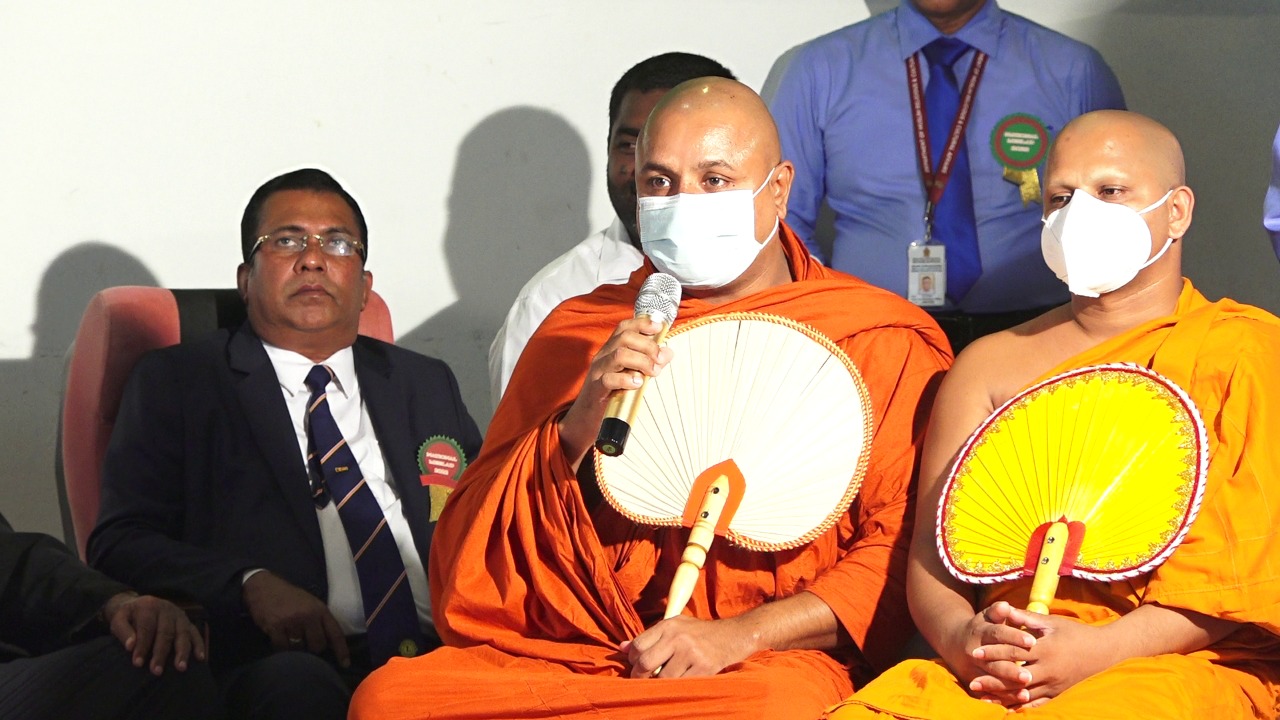 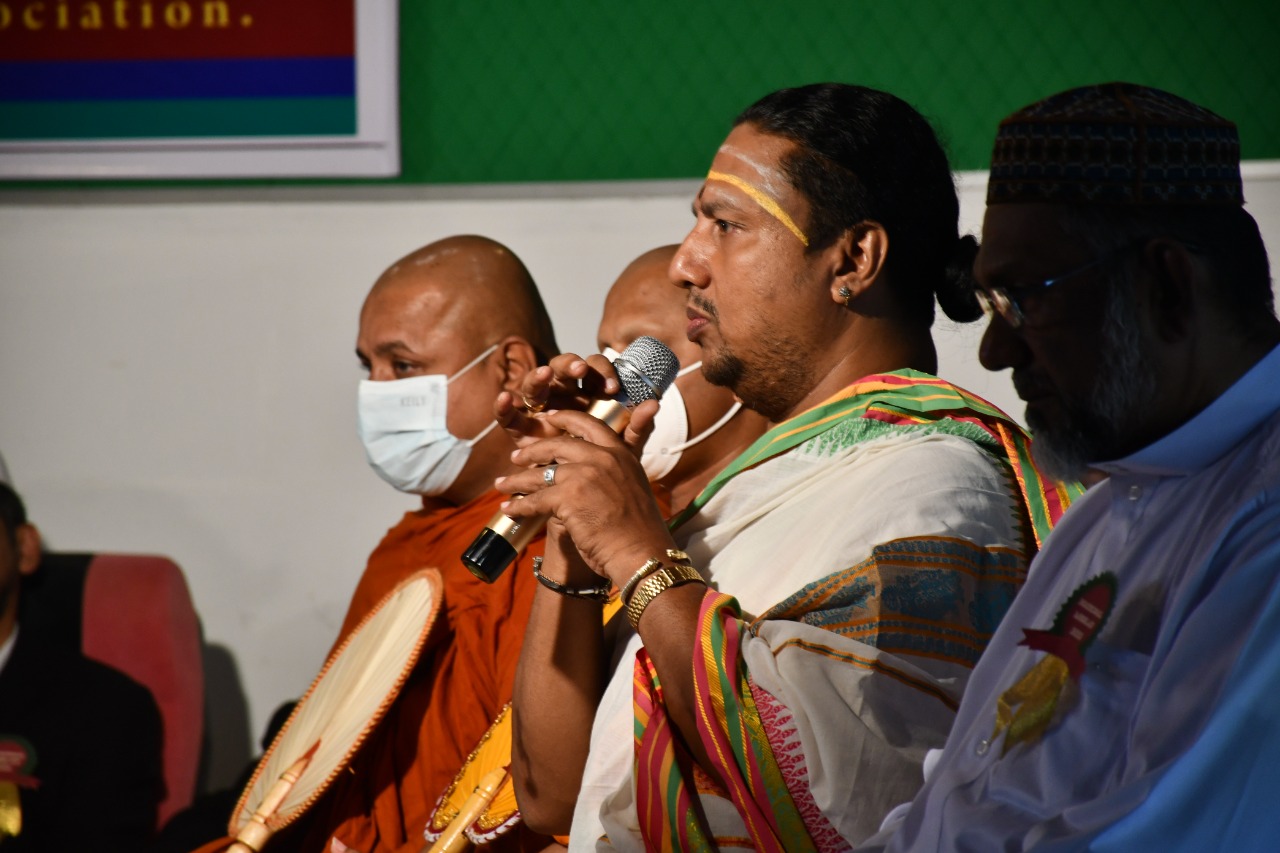 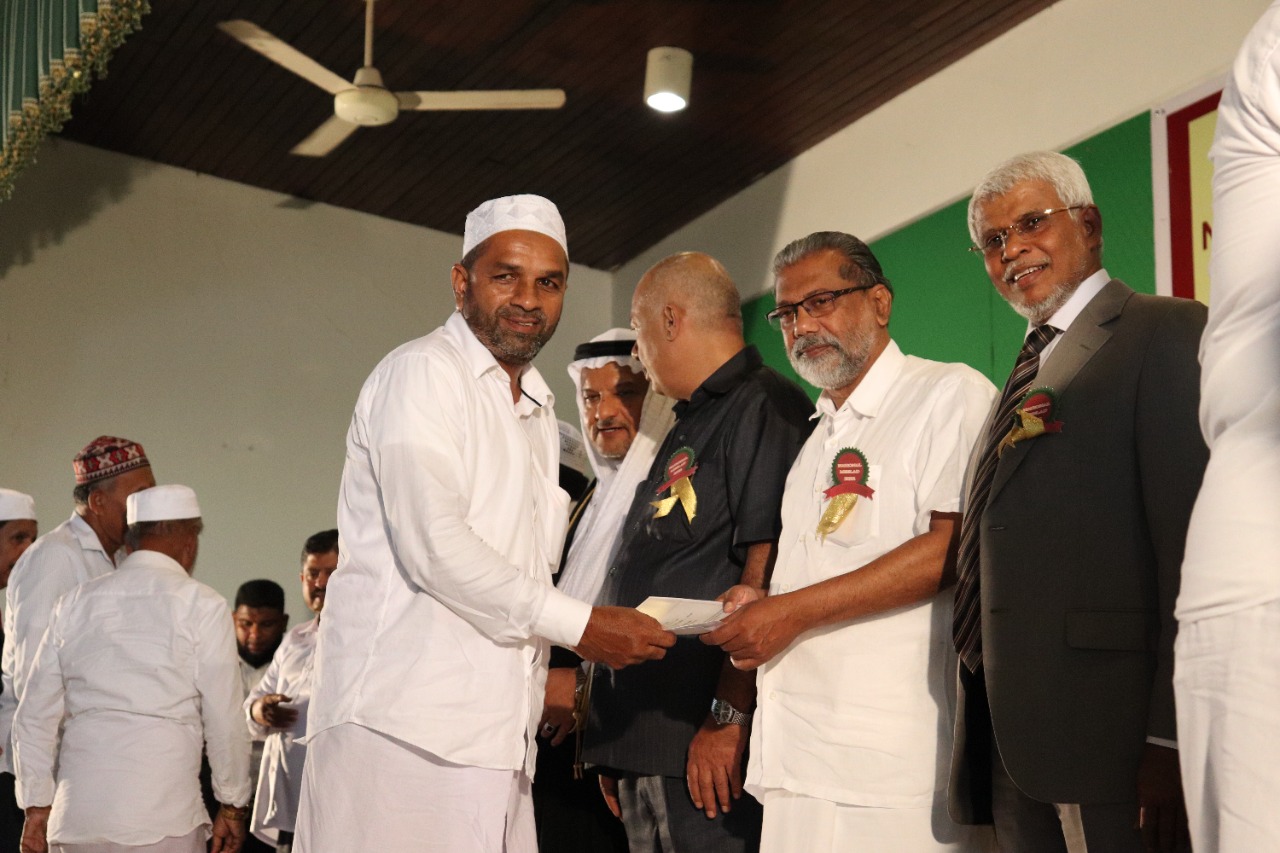 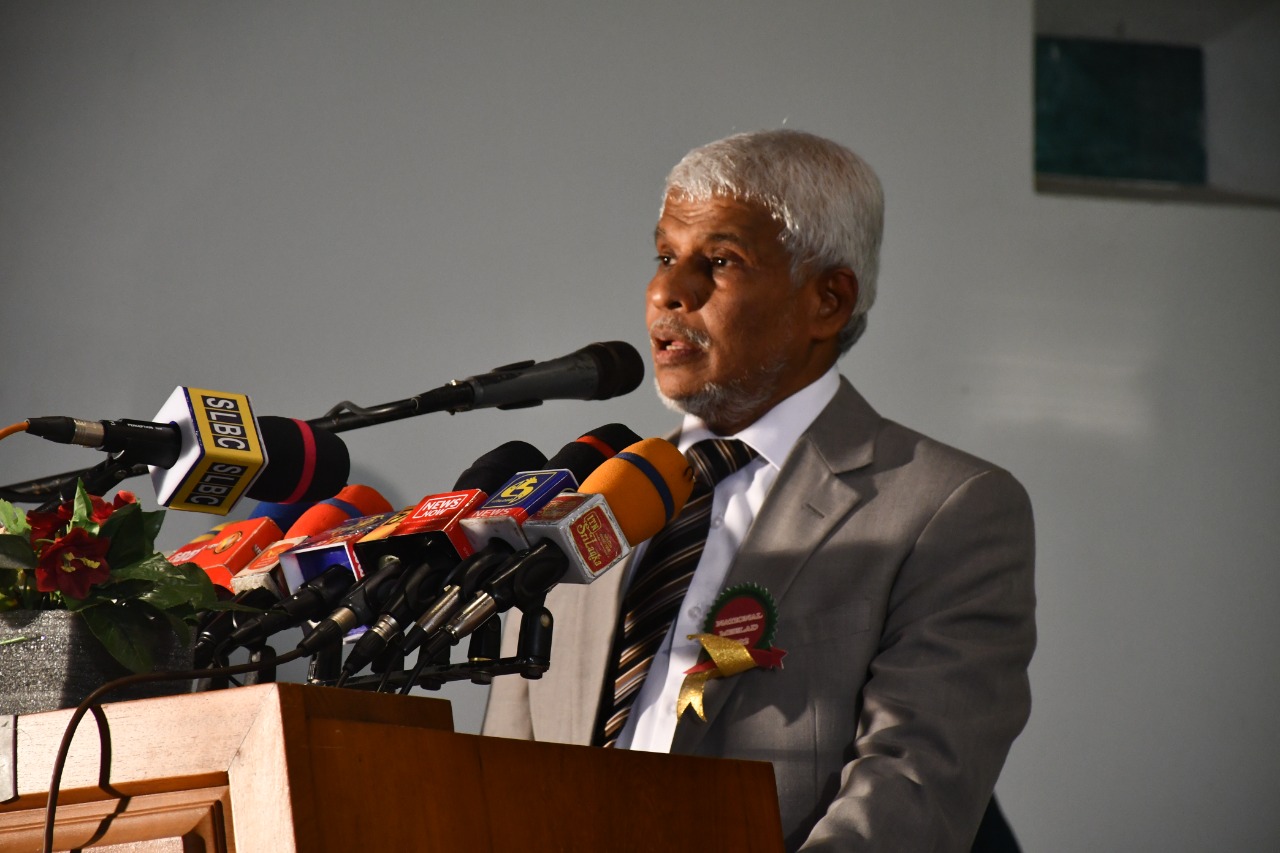 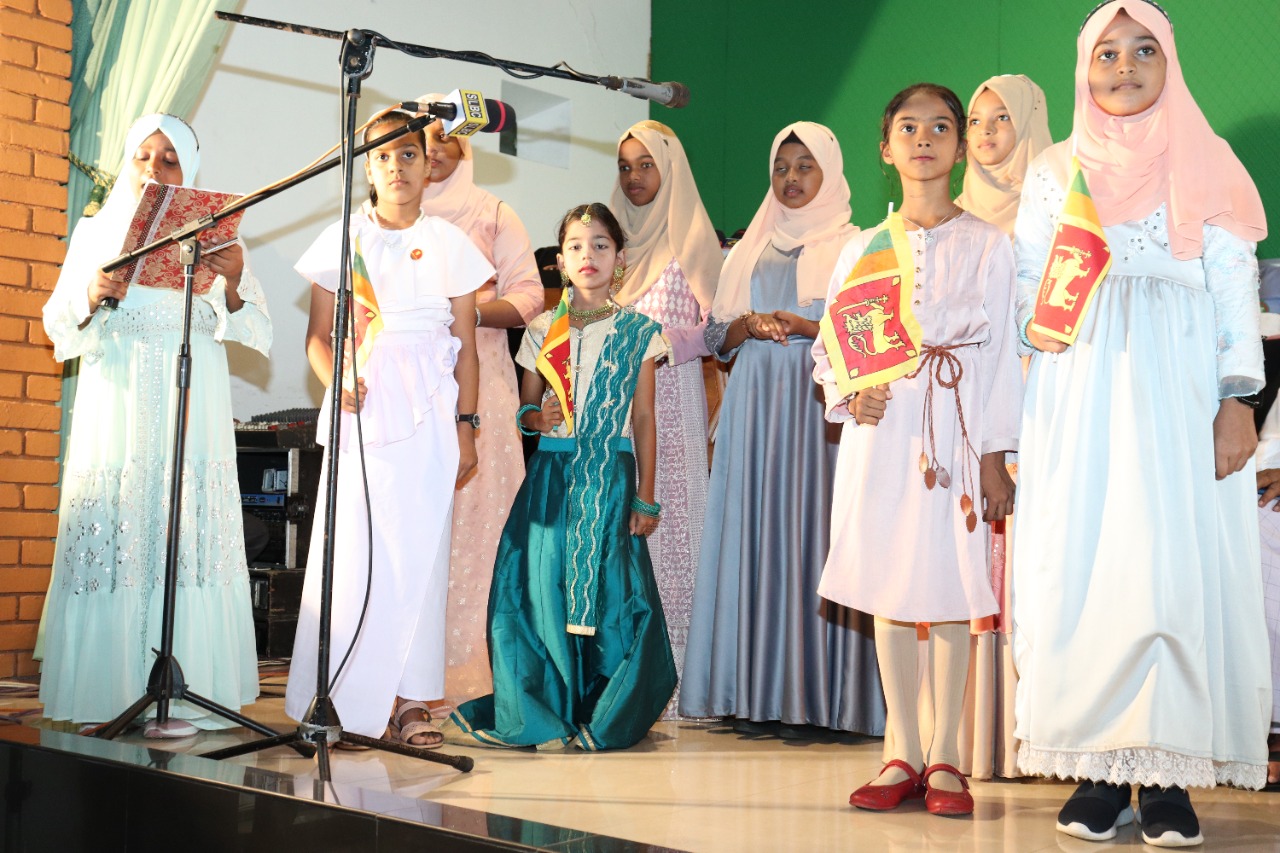 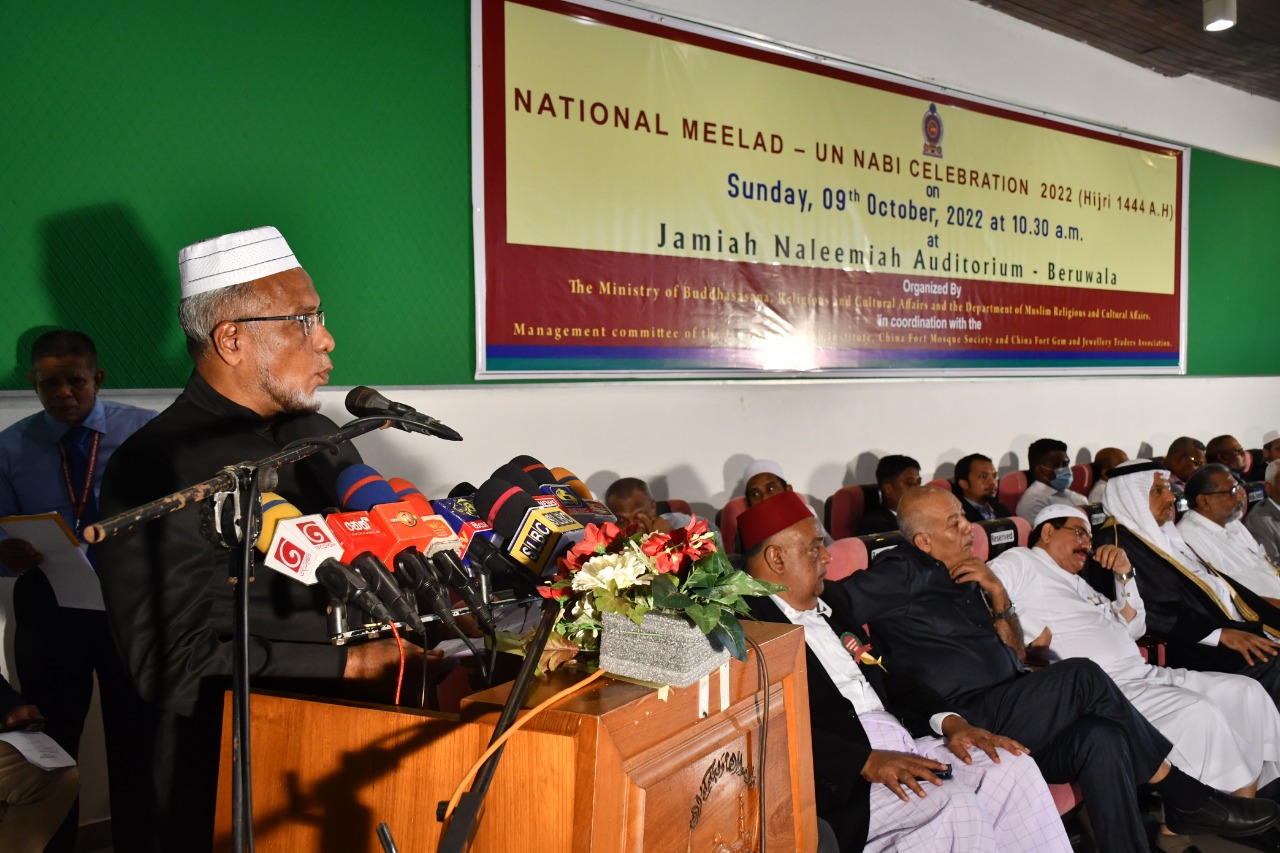 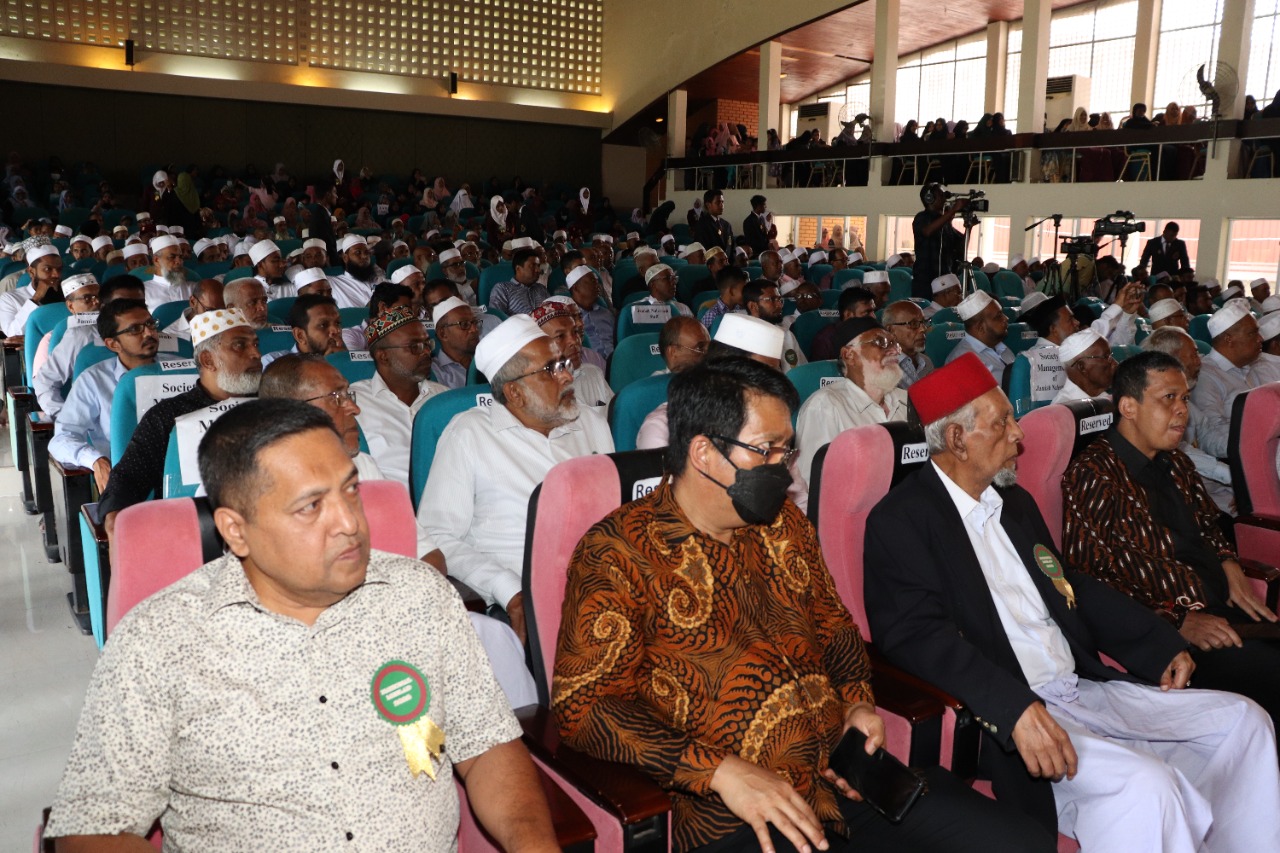