Donation of Dates from Government of Saudi Arabia – 2021

This time, for the year 2021,Government of Saudi Arabia has provided 75 MT of Dates for the distribution to Muslims of Sri Lanka. It was handed over to Hon. Prime Minister of the Democratic Socialist Republic of Sri Lanka and the Minister of Buddha Sasana, Religious and Cultural Affairs Mahinda Rajapaksa on 16th March, 2021 by the Deputy Ambassador of Saudi Arabia in Sri Lanka, His Excellency Riyab Al Sharif. The ceremony was held the Hon. Prime Minister’s official residence.

Hon. Prime Minister handed it over to Mr. A.B.M. Ashraf, Director of the Department of Muslim Religious and Cultural Affairs. Arrangements are being made by the Department to distribute the Dates to the registered Mosques all over the country as soon as possible. 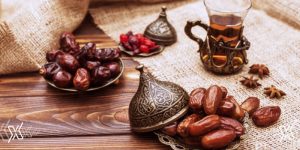